CURRENT STATUS OF OVARIAN CANCER IN THE SPANISH PROVINCE OF CASTELLON. PROGNOSTIC FACTORS IN OBSERVED AND RELATIVE SURVIVAL. A POPULATION CANCER-REGISTRY-BASED STUDY BETWEEN 2004 AND 2008

Background:
The aim of this population-based study was to assess independent prognostic factors in ovarian cancer by analyzing observed and relative survival in a representative Spanish population.

Methods:
We carried out a retrospective, observational, population-registry-based study. Data on 207 patients with ovarian cancer were provided by the Castellón Cancer Registry. Observed and relative survival were described at 1, 3 and 5 years. The effect of prognostic factors on survival was assessed with univariate and multivariate analyses.

Conclusions:
Survival is poor in patients with ovarian cancer. In our population registry based study, only age at diagnosis and FIGO stage were independent prognostic factors for observed survival, whereas only FIGO stage could be considered a prognostic factor for relative survival. 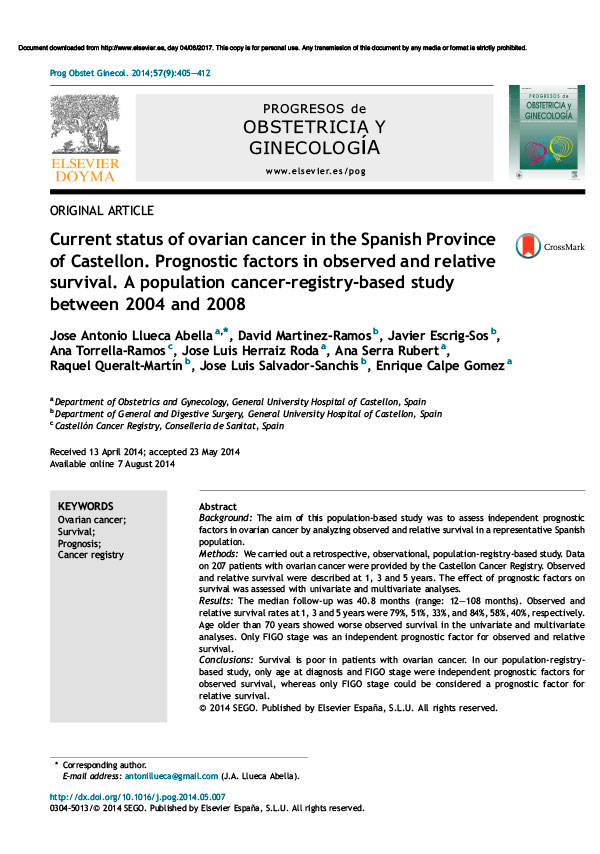